Hello! I'm YumaBev and I have Parkinson's disease and a very unusual sense of humor. Oh, yeah, I also had breast cancer. Reading further may cause fits of laughter! You have been warned..... 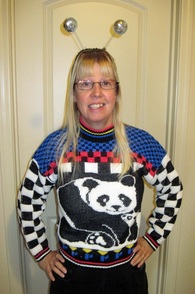 My name is Beverly Ribaudo (pronounced like Rib and Auto, which are two of my Wonderful Husband's favorite things). I was FINALLY diagnosed by Dr Julio Zonis, with Parkinson's disease in 2007, at the ripe old age of 47; however, my symptoms started when I was in my thirties. Eight plus years of hearing "I Don't Know" from medical folks from Florida to Colorado to Arizona and various places in between is a very long time and without a good sense of humor, I would have gone insane (instead I just went nuts.)

Education:  I was not a straight A student. I was a cheerleader and in the marching band in school. I played clarinet; badly. I danced and tumbled and hung out with the D students, because they were more fun. However, I was not stupid. I usually got five A's and a B on my report cards (the B's were in Gym class, band, typing, etc). I had near perfect scores on my college SAT's and turned down a scholarship to a fancy university in the northeast. I tried attending a Community College. My plan was to study accounting, but most of my classes were stuff I had learned in Junior High and boring, so since I wasn't interested in becoming a professional anything, I quit. My parents were disappointed and called me the black sheep of the family. I just wanted to have fun.

Employment: During my working career I was mostly a number-cruncher; spending long boring hours as a cashier, bookkeeper, office manager and banker. I brown-bagged my lunch and sewed my own clothes and saved and saved and saved. I retired at 31 and for sixteen years, I traveled all over the USA and Canada in a Recreational Vehicle with my Wonderful Husband. During these years, I occasionally worked part time, but mostly I had fun. The upside of all my travels is I can ace the US Geography categories on Jeopardy every time!

Advocacy: After Parkinson's put an end to my very fun traveling life, I reinvented myself and became a comedienne. I performed in comedy shows for seniors, I wrote and sang my own song parodies (even though I can carry a tune,) I cheered folks up who were having a rough time. Then, in the summer of 2011, I started writing a blog, called Parkinson's Humor, which now has reader's from 160+ countries and more than 350,000 page views. I became a Parkinson's Advocate; speaking to groups, educating people and medical school students about Young Onset Parkinson's, and always using laughter as my main tool. In the summer of 2012, my first book was published, also called Parkinson's Humor. Links to where to purchase a copy of my book can be found on the Buy my Book tab. In January of 2013, I became the "head banana" of our local Parkinson's Support Group. I submitted an entry in the 2013 Neuro Film Festival called Not Our Father's Parkinson's, it didn't win, but a lot of people have watched it, so who cares?

DBS: In October of 2012, I had Deep Brain Stimulation surgery (STN bilateral) performed in Tucson by Dr. Thomas Norton. After a shaky start (pun intended) and some problems with my scalp not wanting to stay closed, my settings were optimized and I am doing well. I have a second blog called My DBS Story. It is written in book form, so you can start at the top and read it in chronological order.
Breast Cancer:  I was diagnosed with Breast Cancer on April 15th of 2013, a fitting day if you ask me. Here in the USA, that is the dreaded income tax due day. So, Instead of losing "an arm and a leg" to the Infernal Revenue Service, I lost part of my right breast to this darn cancer.  The surgery went well, the cancer had NOT spread to my lymph nodes and my follow up mammograms have been good. Recovery was slow going though. It's amazing how having Parkinson's complicates everything else.

I am available to speak to groups about Parkinson's, if you are interested, email me at YumaBev@gmail.com

Have a Happy Parkie Day!
Powered by