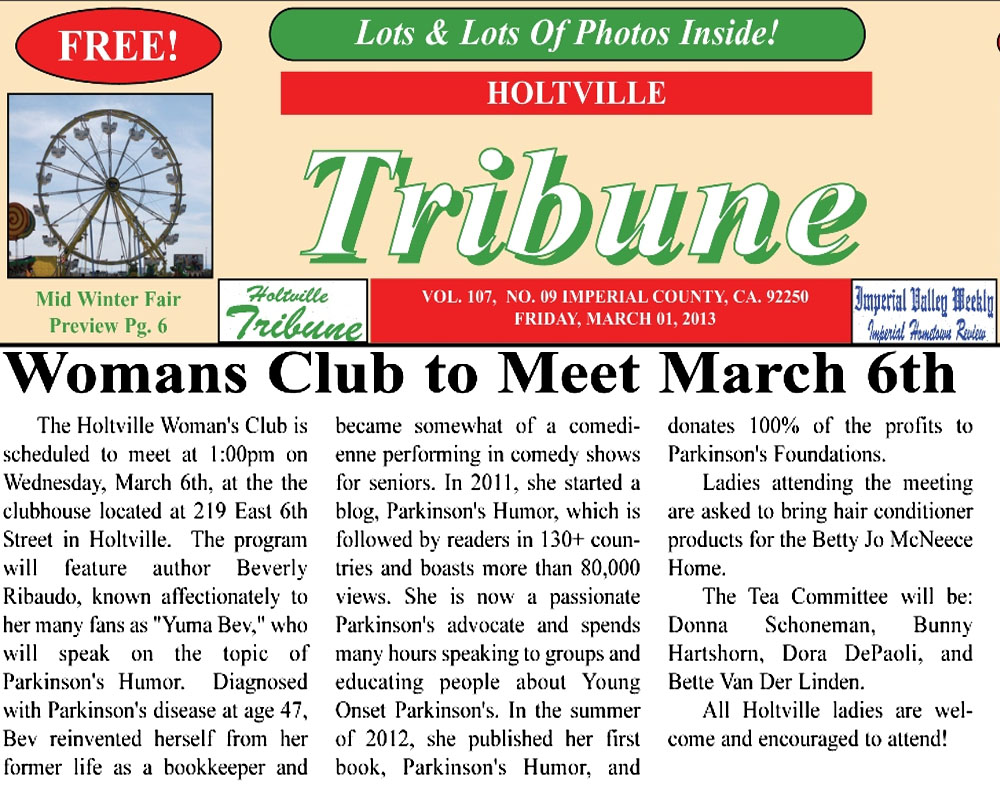 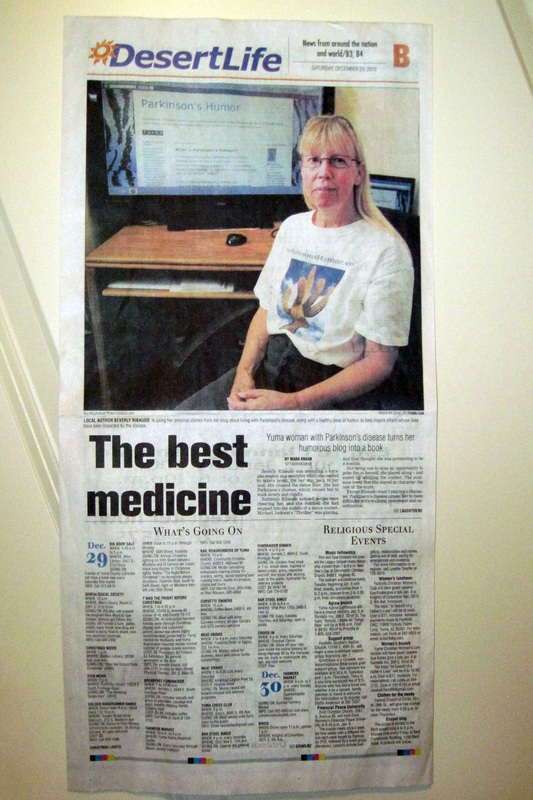 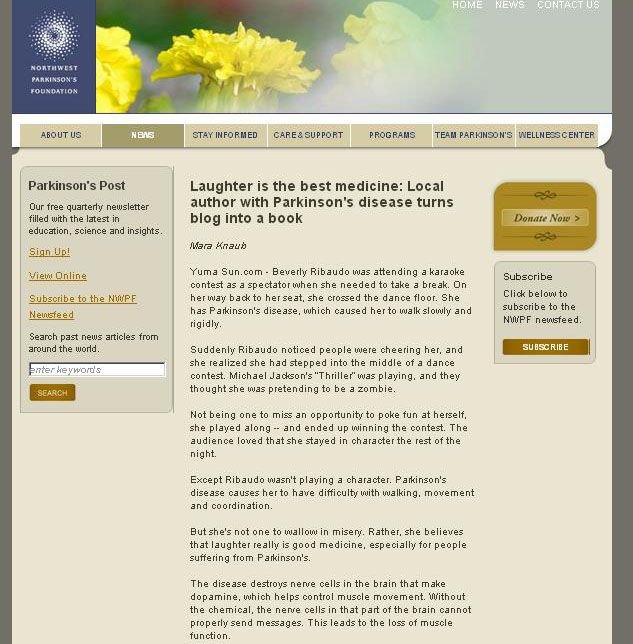 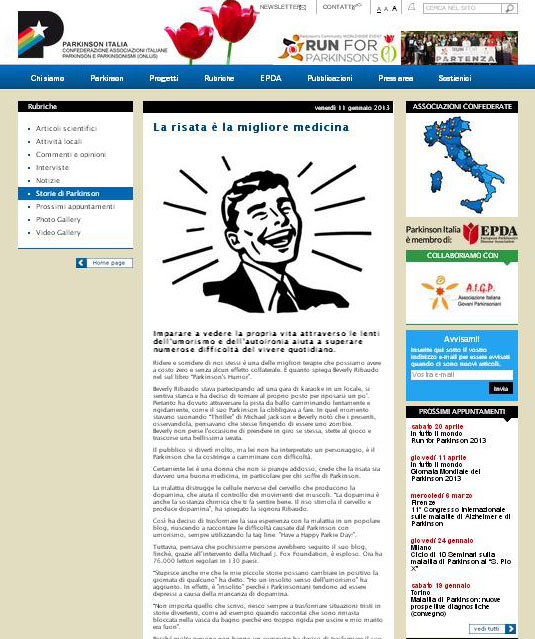 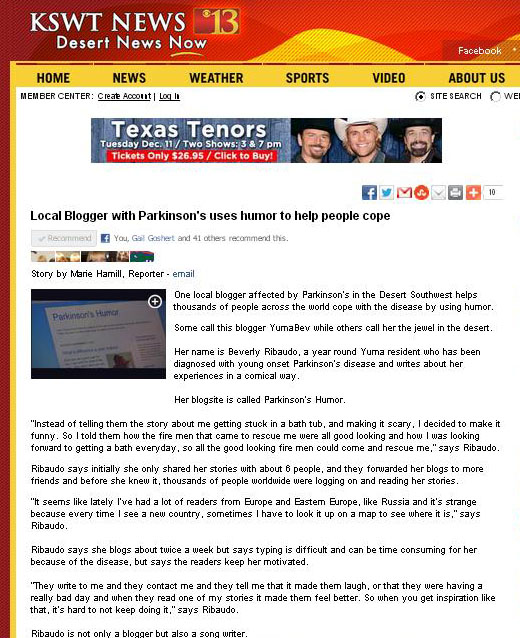 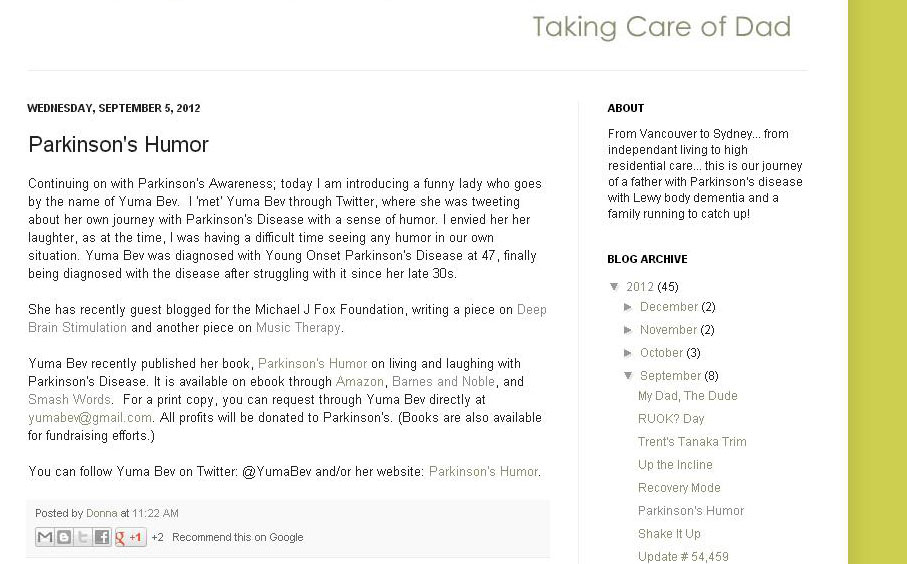 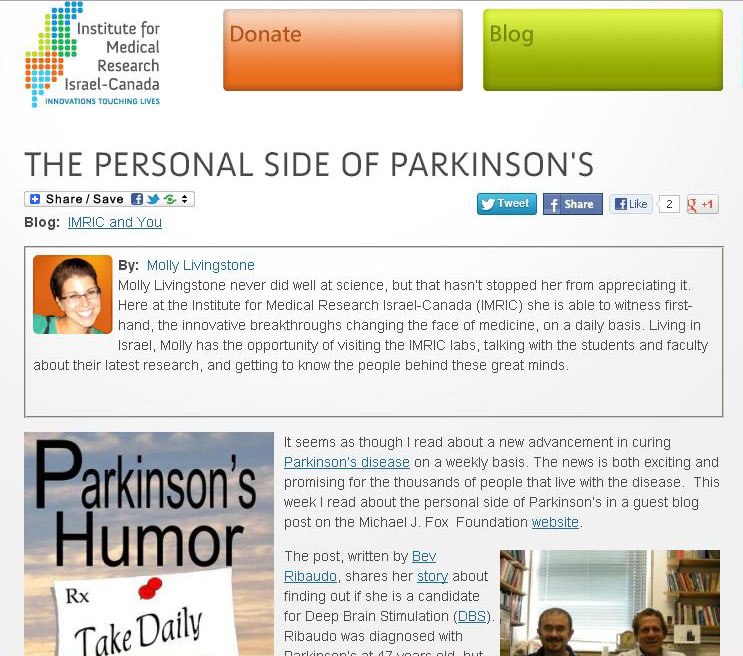 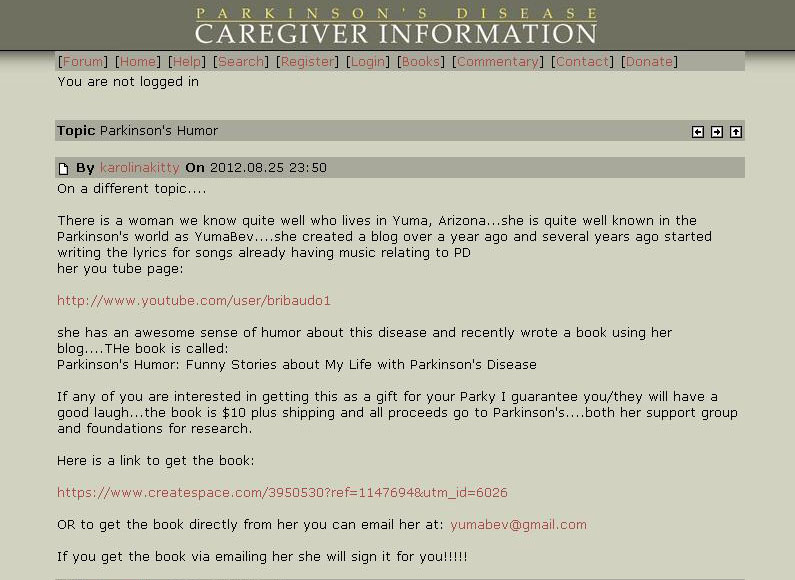 Bev Mittan Ribaudo (Yuma Bev) – Superstar YumaBev, as most of her friends know her, is one of my favorite nominees for an NPF Superstar. Bev has a wonderful website at www.ParkinsonsHumor.com, where you will find these words at the top of her page: I am a Young Onset Parkinson's patient (YOPD) with a sense of humor, also known affectionately as a Parkie. My goal is to make people laugh and always see the best in life. I'm fighting Parkinson's one laugh at a time! Come and laugh with me. I don't believe I have to add much more for you to know that Bev is such an inspiration to anyone who knows her and I think the ability to provide laughter in the face of PD is quite an asset, one she so readily shares. I just love Bev. I can't say enough about her consistent work and also mention that she does all this, as she faces her own struggles with PD. I am so grateful for her friendship and, as an advocate and not an individual with PD myself, love that she brings smiles to me. What a joy. She is a winner in my eyes, whether she wins this or not!


I nominate Bev Ribaudo for Parkinson's Superstar. I love her humor about life. She has Parkinson's disease and laughs about it. I know she has bad days, but you never hear her complain, she just keeps on smiling, finding humor in everything. One day I logged into a Parkinson's chat room and she was there. I told her that I was having a bad day, she didn't ask any questions, she just started playing some fun songs to cheer me up and as others came in to chat, she told them that they needed to help cheer me up. Everyone started making jokes and that helped me take my mind off of myself. She does that for everyone, she can take anybody's frown and turn it upside down, with just a few funny words or one of her Parkinson's songs. She can make up a song about anything and make it funny. She knows that her voice isn't in tune, but doesn't worry about it, and even jokes about it. I know she's had her share of sorrow in her life, but she goes on living and laughing. I love her blogs, she knows how to make everything funny, no matter what it is. She enjoys being a Parky and shares her humor and positive outlook with everybody. I call her the "Queen of Parky Humor" and admire her very much. She is a shining Parky Super Star in my eyes.


I want to nominate Yuma Bev, she is the most optimistic person I have ever met. As for what she has done for the Parkinson's community, all you have to do is look at the comments left on her blog www.ParkinsonsHumor.com to see that she makes a difference. "Thanks for your inspiration! I'm a Parkie and WAS having a bad day emotionally, but had to laugh when I saw your karaoke post! I feel better now! - LongTallSally" or "My friend, Bev, is remarkable. She is such a complete inspiration. She has Parkinson's disease, but has found laughter to be one of her favorite medications to deal with it. Her strength and humor, in the face of struggles that so many of us do not truly grasp or have to endure, provide me with a reminder each day to allow people like her to teach me how to be a better, kinder and more compassionate person. She teaches me to never forget there is a way to shine in the face of things we might never have thought we could laugh about." or "you are amazing and inspiring! LOVE your posts! :) my husband was just diagnosed with Parkinson's a few weeks ago, although we have been dealing with symptoms for at least three years and just now got a name for it all. funny how you learn to deal with all the strange happenings. now i read the suggestions and think - hmm, i was already doing that! peace and joy to you and yours!". I think those comments say it all, don't you agree?


It's my honor to nominate my wife, Bev Ribaudo (Yuma Bev) as a Parkinson's Super Star. She was diagnosed with Parkinson's by a Neurologist a few years ago. Among other things, he told her Parkinson's could cause depression. Not only did Bev NOT get depressed, she became more upbeat. She became active in a local Parkinson's support group and an online Parkinson's chat room. Soon she started writing funny song parodies about Parkinson's and a Parkinson's humor blog which has over 15,000 readers from almost 100 countries. She was also featured as a guest blogger on the Michael J. Fox Foundation web site and been interviewed by all the local Yuma TV stations. She literally spends every day as an advocate for Parkinson's. She constantly hears from fellow Parkies who say when they are having a rough time they read one of her funny stories and they feel better. That makes Bev grin from ear to ear. Bev has always been an inspiration to people and now with Parkinson's she is even more so. I always tell Bev, Parkinson's did not destroy your life, it gave you a more rewarding one. I'm very proud of her. Her husband, Sal Ribaudo


Nominated by her husband Sal Ribaudo 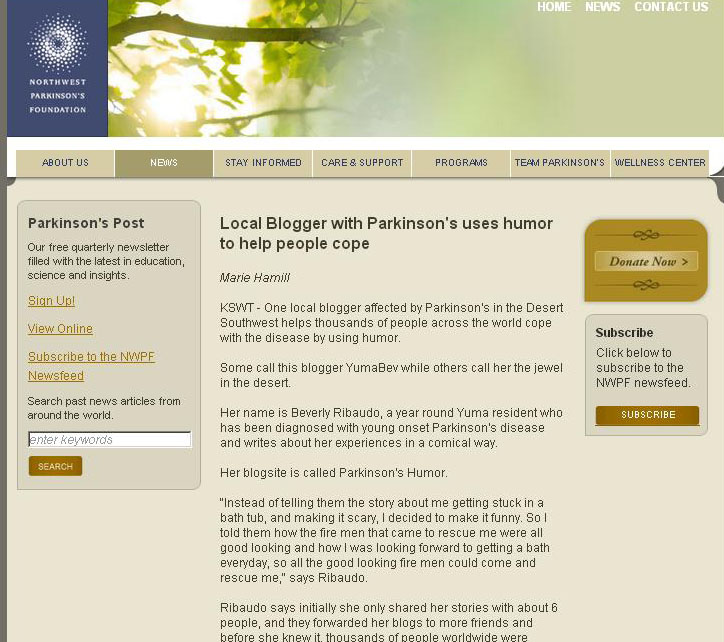 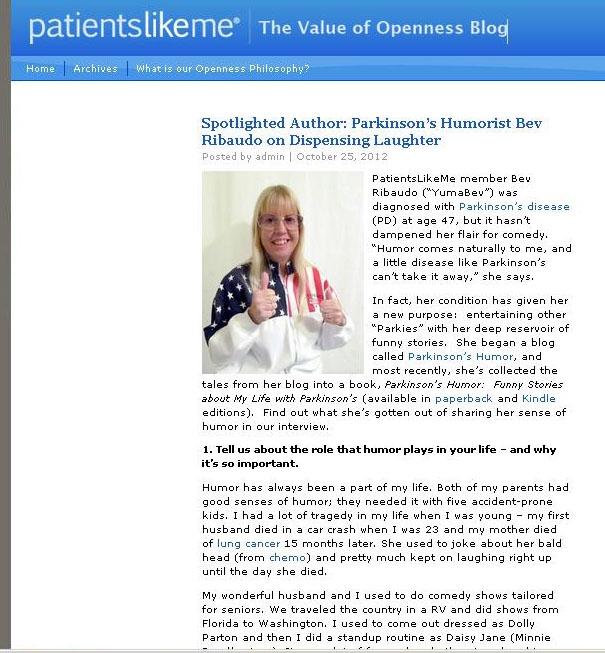